You CAN have an easy-to-understand complex ballot

You CAN have an easy-to-understand complex ballot

The recent MyDemocracy.ca survey by the Canadian federal government on electoral reform has been roundly criticized both in the House of Commons and by average citizens. Conservative MP Scott Reid said the survey “feels like being on a dating website designed by Fidel Castro.”

I’m not an expert in creating surveys but two of the online questions jumped out at me and they both have to do with the clarity of a ballot:

A ballot should be easy to understand, even if it means voters have fewer options to express their preferences. Respondents are asked to choose from a scale of “Strongly Agree” to “Strongly disagree.”

Under the heading “Which would you prefer?” Respondents are asked to choose one or the other of the following:

Once you have completed the survey, you can see where you stand on certain themes. Under “ballot detail” the two positions are “simplicity” and “precision” as if you can’t have one without the other. 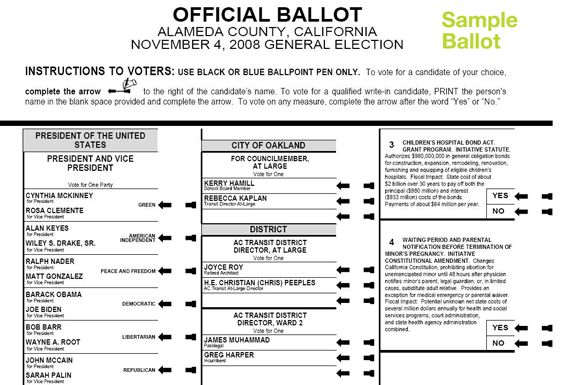 Usability expert Dana Chisnell has written clear, concise guidelines for a plain language ballot. She writes about the American voting system but I would urge our Members of Parliament, particularly those in the Liberal Cabinet to study what she has to say before deciding that some electoral systems, such as proportional representation, will lead to ballots too complex for Canadians to understand.

I must stress that these were complex ballots. Each ballot was several pages long and included instructions on how to vote, an option to vote for all candidates of a single party, 10 party-based contests, four non-party based contests, and three amendments or measures.

This in-depth study was based on the American system that uses a computerized voting machine but it can be applied to the Canadian paper ballot system. The study is so detailed it can and should be replicated in the Canadian context BEFORE parliamentarians decide that complex ballots cannot be made understandable by the average Canadian.

The MyDemocracy.ca survey appears to suggest that one cannot have complexity and clarity at the same time. I beg to differ and urge our government to read through the Redish study to see how plain language can make complex ballots clear and easy to understand.

You can find the entire study on the National Institute of Standards and Technology (NIST) website.

Catherine has been a freelance plain language consultant since 2000. Clients include the the Government of Nova Scotia, the Nova Scotia College of Physicians and Surgeons, Safety Services Nova, the Atlantic Pilotage Authority, Dalhousie University, the Canadian Mental Health Association, and Spring Loaded Technology. Catherine provides writing, editing, testing and training services. She possesses a Master of Education in Literacy degree from Mount Saint Vincent University where she specialized in plain language.
cbuckie@ns.sympatico.ca / Blog / Bio
iwritewell.ca

You run a business. Clear communication is more than a writing style: it's a management strategy